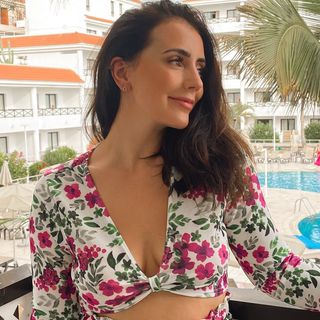 Let’s not beat around the bush, Rebecca has morphed from being an average mum influencer on YouTube to quite possibly one of the most self righteous, egotistical, disingenuous MLM sellers on Instagram.

She constantly edits her photos to give a false impression of her body despite claiming to have embraced her body post-childbirth and preaching to others. She regularly posts wording of female empowerment but comes across as almost brainwashed.

Her parenting skills are severely lacking and she dresses her children in cheap, ill-fitting clothes whilst spending a small fortune on constant beauty treatments and shop hauls for herself. She takes her children out of school to go on holiday and the poor things are nearly always holed up in their dark cottage in the Yorkshire dales, miles from anyone and any friends. Rebecca seems to have lost her way since moving there.

In short, she’s an abysmal sales woman who wants to sell you a facial sander or recruit you into her team of other women who pretend to be earning huge amounts of money but aren’t. Her content is extremely bland, inconsistent and poorly executed, much like her cooking skills. Would definitely not recommend!

Where do I start with this woman. Started out on YouTube, gained fame because she had nasty perverts commenting on her videos where she’d flash her tits or arse- so she just did it all the more. Thinks she’s something special despite constantly editing her pics to make her look skinnier than she actually is. One of her videos was featured on a pornographic website wherein her genitalia were visible through her clothing . Despite this being brought to her attention she cried troll. No thought for her family, kids, or brands she was representing either!
Called COVID a load of overhyped crap. Constantly lavishing herself with treats but not her kids - kids are in grubby clothing day after day, kids even slept for months on a mattress on the floor covered by a thin sheet as she wasn’t gifted the slats/bedframes and didn’t want to put her hand in her pocket for the bedframes.

"A basic influencer who got lucky to grow a small following a few years ago, struggling to grow in today’s cliamte"

Rebecca really got lucky to grow a small following a few years ago, if she was to start out now, she would struggle. A lot of her followers have been bought, Rebecca says the trolls bought them, as her Instagram following as been stagnant for the last 2-3 years.

It all really started going down hill for Rebecca when she had an ad with Matalan pulled because her partners racist/fat shaming and homophobic tweets were unearthed and sent to the brand, they swiftly removed her ad from their page and not long after this she was dropped by Channel Mum. This only came to light months later, despite Rebecca claiming to always be ‘happy’ she later revealed she was miserable with Channel Mum and much happier with the MLM scheme NuSkin selling her beloved Lumi Spa. Her release from Channel Mum may also have had something to do with the fact Rebecca was featured on the popular site ‘pornhub’ and she claimed covid was a media hype. She has more recently doxxed followers, and give them the two fingers, claiming the trolls ‘are going down’.

Rebeccas content these days is mundane and repetitive, it’s a hard selling page for the Lumi, her beige shopping hauls, terrible parenting of her ✌???? sons and her weekly ‘topic Fridays’ in which she gets her vanilla followers to send in their dirty secrets. She doesn’t give a sh*t what people think of her, and she goes out of her way to prove this, most of the time her children feeling the brunt of this. The only entertainment Rebecca provides is the constant effort to appear wealthy (which is the opposite), her monthly trips to a&e for stomach aches and her hideous fashion and accessory choices oh and she also pretends she can drive her car from time to time, when the reality is, her partner Steve drives her around.

If you want car crash viewing, Rebecca is the girl to watch!

Really do like her house in the Dales but other than that there's not much more to admire. She's very pretty and has a good figure. I wont forget her saying "covid is a load of rubbish, the media are hyping it up like there's no tomorrow because they're bored" influencers should stick to what they know and not say things that can be damaging.

"Companies Should Be Aware..."

Some very concerning behaviour from this 'influencer' and her boyfriend.

But the real icing on the cake came this week, when Rebecca's husband shamed another holiday maker by posting her nude photo online without her consent. As far as I'm aware this is a sexual offence?

How they continue to earn any kind of income from 'influencing' is beyond me. Companies should be ashamed to be affiliated with them.