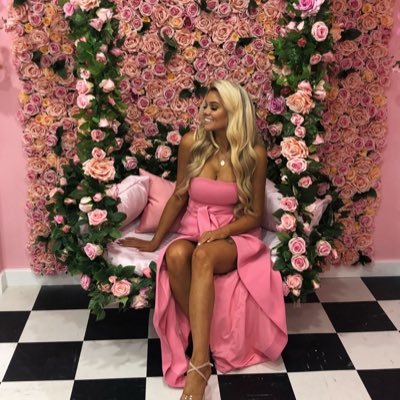 "what on earth is this"

this woman is in top 5 of my worst influencers! i find she is always lying about something and for no reason!! i am do drag as part of my job and stupidly i have used this lady for reccomendations on makeup it is never what it looks like as she so badly filtes everything! it looks completely flawless online then cakey when you buy it, i believe she will sell anything that makes her money

she does the same with her body and has been caught out numerous times with bad photo shopping. i cannot think of a single good thing she has done and would not reccommend her

This person claims to be a makeup artist but is only able to do one look and isn’t able to correctly apply lashes. She heavily filters her face so it’s impossible to tell what the makeup really looks like, she also doesn’t know how to correctly use brushes. Big red flags for a supposed makeup artist.

She promotes toxic body issues by heavily photoshopping pictures of herself in order to appear slimmer. There is nothing wrong with her true size, but she photoshops to appear a size 8. Extremely toxic and unhealthy for young girls to witness things like this.

She has a child and regularly promotes dodgy and sometimes downright awful parenting yet paints a picture of a perfect life which again is toxic, especially for new mums who won’t be able to emulate her completely fake lifestyle. Everything that comes out of her mouth is a fabrication or embellished to make it appear like her life is wonderful. Absolutely woeful person, do yourself a favour and avoid.

Claims to be a make up artist but only ever seems to post heavily filtered photos how are we supposed to see what it rally looks like? It baffles me how people still buy into it

She’s also a normal size but filters herself to look tiny what message does this send to young people?

"Not the best or my favourite"

She isn’t the best she doesn't seem to know what her job is, she is meant to be a mua but all she does is 3 brides a year and doesn't update any of her skills, she uses iconic brushes the wrong way so she has to delete the video, she doesnt know which product she is using, hair burrst or voodoo and well I could go on and on but just read the wiki. Love from Max ????‍???? (Would love a garden to roll around in)

"So called make up artist"

This woman claims to be a make up artist, however, I beg to differ!
- Make up often poor applied
- Uses to many filters, a good make up artist would need so much of this, her work should look good without filters!
- photoshops herself to a tiny size, she is nothing like the size she presents on her profile. I believe she is truly fatphobic and cannot bear anyone believing she is even slightly larger than average.

Constant stream of lies and badly edited images. A terrible influence for our young generation.

She claims to be a makeup artists but posts very little makeup content, when she does it is usually an ad and she often gets the product names wrong or doesn’t even explain what they do. She has a line of products with Home Bargains that she describes as ‘really cheap’ for people just getting their kit together, but at the same time posts content about going on multiple holidays a year and showing off her (obviously fake) designer clothes. She doesn’t seem to have a real target audience.
Kate seems like the kind of person who can’t say no to a freebie, and loves to show them off, so will advertise absolutely anything, she counteracts this greedy grabby behaviour by filming herself visiting a charity twice a year.
She also can’t seem to cope with people having an opinion on her, regularly doxxing and blocking anyone who questions her, as well as having regular rants on her stories about trolls, the boy who cried wolf springs to mind…
She claims to show ‘the reality of motherhood’ but what she actually shows is a smug highlight real, and gives dangerous advise. Often the truth comes out months later, for example, when she went to a garden rave 9 days after her C-section and told her followers she was feeling great and doing so much. It came out months later that she was actually hospitalised post birth due to an infection in her wound.
All in all she is one of the worst influencers I have ever come across, she doesn’t have a USP, she doesn’t have an obvious target audience, she is lazy and haphazard, she can’t proof read her posts, she can’t take constructive criticism, she is smug and entitled.

This so called influencer is one of the most disgusting human beings around. Claims to be a mua but her makeup look, not looks but look is stuck in the year she started doing makeup. She is vile. She is a bully and she is the biggest troll to ever grace the north west. She is a PATHOLOGICAL LIAR. She is a danger to young girls and to new mums especially. She can not take any criticism and anyone who has a different opinion than her are called troll. One of her followers on social media asked could she make her wording abit bigger as she struggles to see, and guess what happened, big truck called the follower a troll and blocked her. She claims she doesn’t use any filters or editing on her photos but if you look closely you can see the give away signs, the couch being one of them. She claims videos can not be edited, but guess what big truck they can and every video and photo you post you can see the editing and filtering. She also claimed that a “troll” sent her a card for her birthday, but if you take alook through her highlights especially the weaning you’ll see for yourself that the hand writing on certain letters and exclamation points are exactly the same. When her engagement is low you can always rely on her to bring out the trolling she receives. Kate/Katie/Jane Hayes I think you’ll also find that your initials are not KHM. They are KJH. Take a look at the wiki on her and see for yourself how disgusting she is. This one also likes to stomp up pregnant girls driveways with her bf in tow with his tool belt still on to confront them as they made a complaint about bog breath drinking in pregnancy. The videos are also on the wiki where she admits to drinking in her pregnancy and advocates it. She also claimed that Hello Fresh gave her a discount code when in fact hello fresh said that they hadn’t worked with her before. Look at how she edits and filters her own child. Her child looks exhausted all the time, check the child’s eyes and you’ll see how purple her eye sockets are which is quiet disturbing for a 14 month old child. Hopefully sooner rather than later the companies who work with her and her followers will see through her and then that’ll be the end of this person.

The editing on her photos is horrific and then the lies to say she does not edit but we see videos etc and can see her real shape!! She’s a normal clothes size why lie!! Very damaging to young girls watching her

This girl is dangerous to new mums and young impressionable wanna be makeup artists. She lies about using filters, losing weight, photoshops herself to look nothing like herself in real life. Known to have very smelly breath/poor hygiene and to be patronising to customers when she used to earn money doing make up. Unprofessional and unrealistic.

Enjoy her content...consistent and entertaining. She puts up with an awful lot; she may not get everything right but the abuse she receives isn't warranted.... accusing someone of drink driving as they are on an insta video with a glass of wine is not on...and if anyone is going to take parenting advice from an influencer then they are the problem not Katie. I think she's very body positive....yes she has used filters but so do most I follow and it's pretty obvious when she is. Her content could do with a bit more variety, as it's pretty samey...but maybe that's just the restriction of motherhood!